Okay so, since we have started going to the doctor’s office every week, this was supposed to be updated every week.  However, my last blog was posted after a doctor’s appointment on Tuesday the 13, but my last doctor’s appointment was the next week, only it was Friday the 23rd; almost two weeks later.  I was just too tired to post anything until now.  Today is my day off and since sleep is apparently no longer a luxury I can afford, I was up at 8:15 this morning….I got 5 hours of sleep.  For some people, that may be enough.  For me, right now, it’s not.  I feel tired, but I more so feel…….Awake and dragging, if that makes any sense.  And, without further ado, I will go on with the show.

Total weight gain: My weight is one giant yo-yo (well, my stomach is giant, anyway).  From Tuesday the 13 to Friday the 23, I gained 3 pounds.  Putting my weight gain back up to 11 pounds.  🙂

Cravings: Water and Ice.  Specifically McDonald’s ice…And anything I see on the Food channel.  I should probably stop watching that channel while pregnant.  I should watch more dead people shows. At least on those I’m not tempted with things I can’t have.  That may not have sounded right to some of you, so I will re-phrase.  I don’t want dead bodies, nor do I want to solve their murders.  I do, however, want all foods I am not supposed to have.

Maternity clothes? Can I just take this question out?  Well, I suppose I can since it’s my blog and who makes the rules here?  That’s right, me.  But…..I don’t feel right taking it out.  It just wouldn’t  be complete!  So, to answer your question:  Yes, stupid quiz, of course I have maternity clothes! 🙂

Sleep: No.  The glider chair was a no go.  Although it is comfy, every position I sit/lay in to sleep is uncomfortable.  Sometimes I can fall asleep on the lovely orange couch in the living room (let me explain that – it is NOT lovely because of the color by any means [ugly 70s orange], but it is literally the most comfortable couch I have ever sat on, with the exception of one at Big Lots and maybe another furniture store.  Okay, it is the most comfortable couch that I have ever sat on that I can afford.), but even that is only for a couple of hours.  There is nearly no hope of me ever sleeping on or in my bed for I presume the next 18 years.

Best moment this week: Now that I know what is hiccups, I love watching her do it.  That has happened a lot this week.

Movement: YES.  She doesn’t really kick anymore, but she moves a lot still.  The hiccups push her whole body against my stomach, and she swooshes from side to side a lot.  I think she’s just excited for the big day! 🙂

Labor Signs: So, I have a fun story for you…I was at work last Saturday (my shift was 12-5) on the desk (they are a little nervous about putting me on the floor now)…I thought I was feeling contractions, but given the date, I brushed them off as the Braxton Hicks contractions….At about 12:45 they intensified….A LOT…I told one of my coworkers about it (someone who’s had a few kids and is very knowledgable about that stuff), and she was asking me questions about where I was feeling them, what it felt like, if anything made it better or worse…..At 1:23 we decided to start timing them, and they were 3 minutes apart when I moved around and 5 when I stood still and pretty intense…They didn’t last very long at all, but when they came, it stopped me in my tracks and I had to bend a little…But the good news was that they weren’t as bad as I was expecting it….By 2 they were still pretty steady so our head of security (who is also an EMT) and my manager decided it was time for me to got to the hospital…I drove myself home (the EMT was not very happy about that), and got Dave…Of course, Dave has been suggesting for the past few weeks that I prepare a bag for the hospital and I kept saying that it was too soon…Whoops…Anyway…I had a little panic attack because the carpets still have to be shampooed, the walls still need a second coat of paint, we still have to go to the LaMaze classes, I still have to get her clothes organized…I just wanted all of that stuff done before she got here…But everyone thought I was panicking for another reason…. 🙂  I let them think that instead of having them think I was crazy…Haha…So, I called my mom  (because she has to be there and she has a 6 hour drive) and let her know that I was heading into the hospital…We got in there at about 2:45, and they took a urine sample and saw that I was VERY dehydrated….I don’t even know how that happened – I drink water CONSTANTLY…I thought I was good…But the nurse said that because of the heat and humidity that has been going on and because I usually drink a lot of water that I need to drink until I almost feel like I’m overdoing it…Until about 5, the contractions were consistently 6 minutes apart, and I was pretty nauseous….I also hadn’t eaten except for breakfast at 10 (I usually eat on my break at work, and I left 15 minutes before I could go on break), so they got me a gluten-free meal from the cafeteria…Poor Dave hadn’t eaten at all that day, so I shared half of my food with him…Half of it made me nauseous anyway (Especially the chicken – I haven’t been able to eat chicken since I got pregnant)….At 5, my contractions started to space out, and a little after 6 the on call OB/GYN (our doctor was out-of-town, but this doctor was actually pretty awesome) came in to check my cervix which was still completely closed and I wasn’t dilated at all…So, no labor…He said that the dehydration brought on the regular contractions (I did ask the nurse if it was all in my head and she said DEFINITELY not….), and he thinks that there was probably another factor, but because they were still about 12 minutes or more apart, he wasn’t sure what it was…BUT, he did say that Maya was VERY healthy and all her vitals looked really good…A plus side was that we got to watch like 6 Spongebob episodes that we hadn’t seen before (at some points it was kind of hard for Dave because while it was on and the nurses were in there, we had it on mute so you could only see what was going on…Dave was laughing so hard that he had to put his hand over his mouth and his eyes were shut and his body was shaking so that he could stay silent…That was pretty entertaining for me!), and we got to not only see, but HEAR her hiccupping…That was pretty awesome…End result: no baby….BUT, the first thing I did when I got home was fully pack a hospital bag…The one we got ready in haste that day, I realized when we got home that I forgot to pack a coming home outfit for her…Or anything for her, but that problem is now solved… :).

Belly Button in or out? Sometimes it’s out.  It depends on where she is sitting in my uterus.  🙂  Sometimes she will push it right out, otherwise it’s just halfway out.  When I take a shower and I hit the inside of my belly button (hey, you should all wash/clean your belly buttons…That is a totally normal thing.  It just feels weird writing it out.) I feel it inside my stomach.  Almost like it hurts, but really it’s just uncomfortable.

What I miss:  Sleeping, sleeping, sleeping, and, uh……SLEEPING.  Man, I just feel like I’m dragging all the time.  There has never been a time when I’m at work and immediately start counting down the hours.  I do that every day now – well at least I do 5 days a week.

Weekly Wisdom:  When you hit about 32 weeks, at least start your hospital bag.  Even if it seems too early, pack it.  You don’t know the birthday that God has planned for your baby.  She may want to get out of dodge early, and if you start to pack it around 32 weeks, every other day or so you will be thinking about it.  I find that now, I keep thinking of things to put in it that I hadn’t thought of before, so when I get to the hospital, I will be set.  Oh, and bring a Boppy pillow with you to the hospital.  I didn’t even think about that, but a friend of mine that had her baby almost three years ago told me what a necessity that was while she was there.

What I am looking forward to: LaMaze classes!  I am actually really excited about them!  They start on August 3 and there are four sessions:  August 3, 10, 17 and 24.  Want to take bets on how many we will be able to make it to??

Milestones:   I think hitting 38 weeks is milestone enough, but just in case, here is another one for you:  I went through all of Maya’s clothes and organized them by size/age.  All the things she will be able to wear right away are in her dresser/changing table.  All the other clothes are separated by size/age and put into 2 3-drawer rolling carts in the closet.  We also got a tub for all of her blankets, and one for her winter clothes/clothes for a year and up.  That was a pretty big Milestone, I think.  I also went through all of her bath stuff, burping cloths, pacifiers, diapers and shoes (girl has already got a nice size collection started!) and organized all of those.

And on that note, I think I will close.  Enclosed is the weekly picture.  Getting big!  🙂 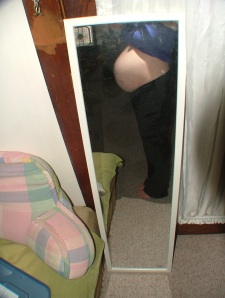 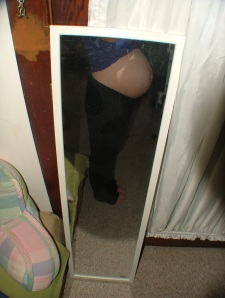 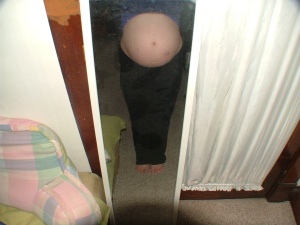